As part of the World War 1 Commemorations Andover Town Council organized a Christmas Day football match, to mark the event that is reported to have happened on the Western Front in 1914. On Christmas Day 1914, a few soldiers on the Western Front came out from their trenches to meet in No Man’s Land, greet each other and play football. Hymns were sung and gifts supposedly exchanged. For a short while a truce was held and enemies played football together.

So on Christmas Day 2014 a few intrepid Andover residents gathered on Vigo Road Recreation Ground to both commemorate and celebrate the truce that saw the famous Christmas Day football match in No Man’s Land, 1914.

The event, began with the Mayor of Test Valley Cllr Jan Lovell, welcoming all those present and the singing of the carol Silent Night, symbolically in English and then in German. The Mayor then gave a short reading and officially proclaimed that from 10:30 to noon, the Recreation Ground was to be known as No Man’s Land.  .

A good humoured, spirited but friendly game then followed.  The Town Council Chairman took the trouble to get dressed in period style uniform and Edward was the youngest player at just 10yrs.

The Photo is the Town Council Chairman, Councillor Geoff McBride leading the way in his WW1 uniform, photo courtesy of Mrs Barbara Long. 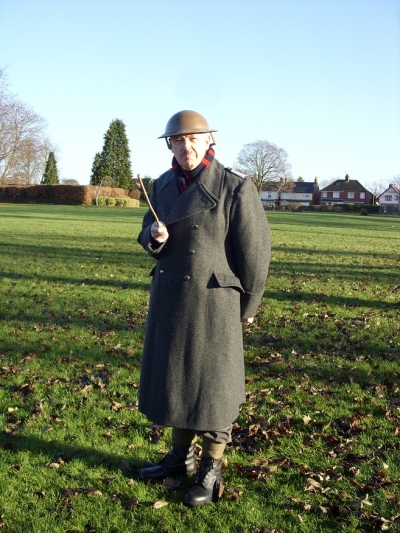